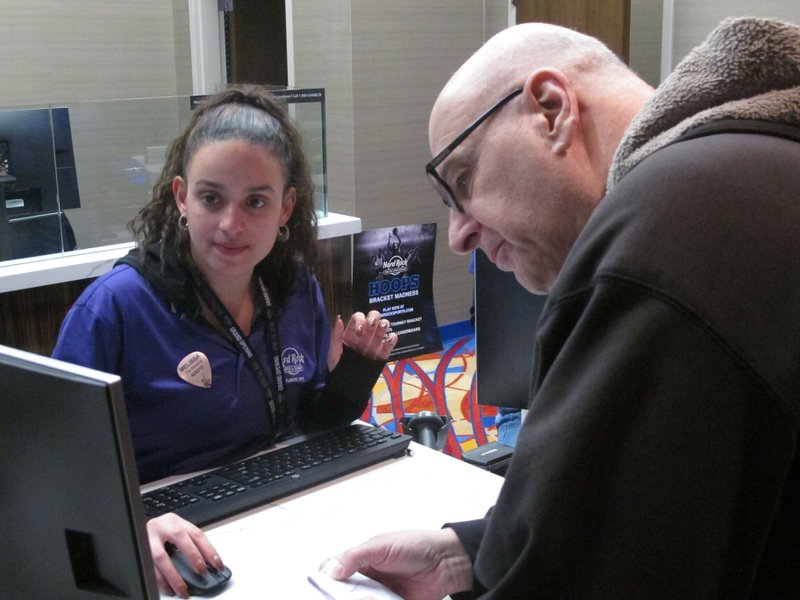 1 of 3
In this March 22, 2019 photo, a gambler, right, makes a sports bet at the Hard Rock casino in Atlantic City, N.J. Since sports betting became legal last year in New Jersey, the state’s casinos and racetracks had taken more than $2.6 billion worth of bets through the end of April 2019. (AP Photo/Wayne Parry)

ATLANTIC CITY, N.J. (AP) — The anniversary of New Jersey’s victory in a U.S. Supreme Court case clearing the way for legal sports betting across the nation was a happy one for the state’s casinos and racetracks, which reported taking in more than $300 million worth of sports bets for the sixth month in a row.

Figures released Tuesday by the state Division of Gaming Enforcement shows the casinos and tracks took nearly $314 million worth of sports bets in April. So far, since sports betting began in New Jersey in June, nearly $2.64 billion has been wagered in the state on sports.

“Sports betting without question has provided a major boost to the local economy, and we believe this excitement will translate into increased revenue and tourism throughout the summer,” said Kevin Ortzman, regional president for Caesars Entertainment, which owns three casinos and two sportsbooks in Atlantic City.

FanDuel, which operates the sportsbook at the Meadowlands Racetrack in East Rutherford, just outside New York City, said it had another great month.

“April was our second biggest revenue month since launch, thanks in part to enthusiasm for the NBA and NHL playoffs, as well as the start of baseball season,” it said in a statement.

The extra money from sports wagers, along with another stellar month for internet gambling, helped the state post an overall increase in gambling revenue of nearly 24 percent compared with a year ago, at over $265 million.

On May 14, 2018, the high court ruled in favor of New Jersey’s decadelong court battle to overturn a federal law that limited legal sports betting to only four of the 50 states.

Eight states currently offer it, and several more have recently approved it and are preparing to begin taking bets. And dozens of additional states are considering getting in on the fast-growing industry.

Internet gambling was up nearly 59 percent to $36.5 million.

The casinos are looking forward to the upcoming summer season, their busiest and most profitable time of year, said James Plousis, chairman of the New Jersey Casino Control Commission.

“Gaming and leisure customers have many options, both online and on site, and Atlantic City is positioned for a great summer season with its addition of new sportsbook lounges and other exciting amenities,” he said.

The Golden Nugget saw its revenue increase in April by 3.7 percent compared with a year ago, to $29.3 million.

The Borgata, which launched a new sports betting platform Tuesday, increased its revenue by 2 percent, to $58.8 million.

For the two casinos that had not yet reopened as of last April, Hard Rock saw $25 million in revenue, and the Ocean Casino Resort saw $16.3 million.

Two New Jersey racetracks offer sports betting. The Meadowlands reported $12.1 million in revenue from sports betting after paying off winning bets in April. That was about six times the level of Monmouth Park in Oceanport, near the Jersey shore, which saw $2.5 million in sports betting revenue.